Parishes and Churches in New Orleans – Researching the History 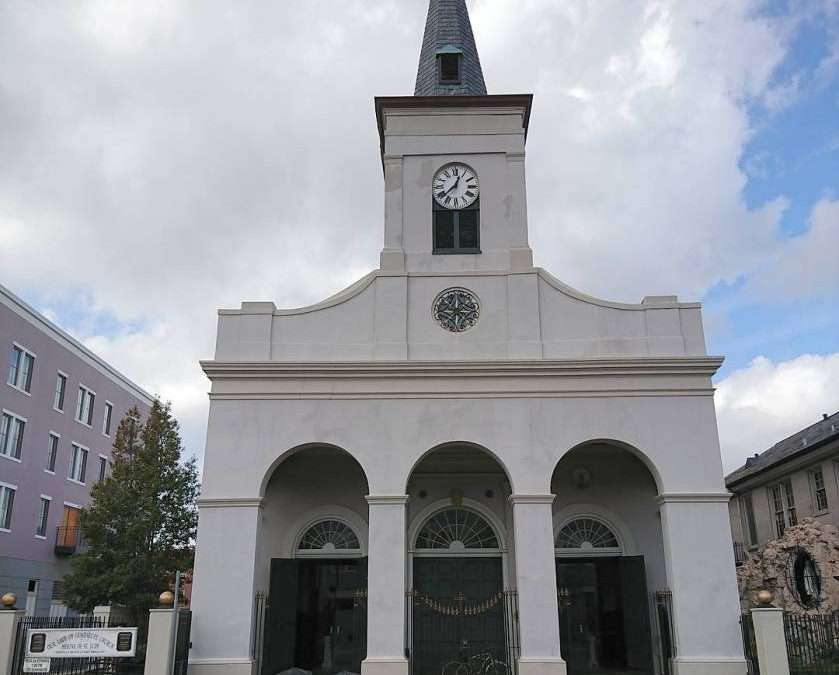 Research, like writing, is never linear. I have a running chat conversation with Edward Branley that delves into many different directions. The beauty of it is, I can search on it and find the conversations that pop up as a “hey, what do you think of this” and use it later on. One perfect example of this was a conversation we had back in November of 2017 about Catholic Churches and Parishes, in New Orleans.

Father Anastase Douay held the first recorded Mass on Mardi Gras  [March 3, 1699] on Louisiana soil near the mouth of the Mississippi River, as part of the founding expedition of Pierre Le Moyne d’Iberville. This is the beginnings of New Orleans Catholicism taking root.

Our Lady of Prompt Succor, Patroness of New Orleans, is believed to have helped the city defend itself against a British attack in the 1815 Battle of New Orleans. Deborah Krause, a Presbyterian minister wrote a historical paper on how “the figure has presided over New Orleans transformation from an 18th century colony to a 21st century republic — and lately to a devastated landscape after Hurricane Katrina.”

The history of churches and parishes have always been fascinating to me. Who builds them, where they’re built, why they’re built in that particular location. Churches, are the building, Parishes are the surrounding neighborhood. Post-Katrina reorganization, there are parishes in New Orleans that have multiple churches. I’m lucky in that Edward always ties churches / parishes into his novels.  For the current novel (almost out, in June!), Trusted Talents, these are all the Churches/ Parishes he mentions:

Wonder why I tease him about needing a spreadsheet to keep it all straight?

There are many old photos, and many histories listed on all the church websites, which helps date the timeline for the church creation, and even if it has been merged since it was consecrated/dedicated.  Case in point, is St. Stephen’s Church, which is a merged parish now (St. Stephen’s, St. Henry’s and Our Lady of Good Counsel to form Good Shepard).

Another bit of interesting that I found during my trip down research lane is about St. Joseph’s Church [1802 Tulane Avenue, New Orleans] .  Dedicated Sunday, December 18, 1892, the original building was across from Charity Hospital. In 1895 under Archbishop Francis Janssens ( the fifth Archbishop) who renovated the ‘old’ church, it became a place of worship for many Negro Catholics under the patronage of St. Katherine. Demolished in 1964, it was rebuilt on the current location in 1866 when Father John Hayden purchased the current plot of land.

Why does St. Joseph’s call to me, other than the history behind it? It has the longest main aisle in New Orleans at 12′ x 150′ long. 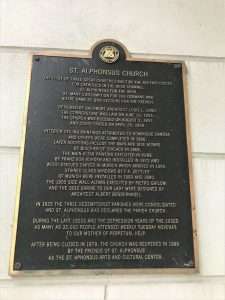 The first of three great churches built by The Redemptorists for Catholics in the Irish Channel.  St. Alphonsus for the Irish, St. Mary’s Assumption for the Germans and Notre Dame de bon Secours for the French.

Editor side note: The last line on the plaque “as the St. Aphonsus arts and cultural center” is a typo. Someone should tell them to fix it.

Another site I value for research is the New Orleans Catholic Church website. They even give you history of the various pipe organs that are still (sometimes) in use at the churches.

Finally, don’t be afraid to follow an idea or a fragment of a sentence you find when you are reading, you never know where it may lead.  I find that most of the readers are hungry for the historical details you can put in your novel/ manuscript, especially when it furthers your storyline. This is true for real-world places.  One never knows what reader you may spark to learn more.

For more information, check out:

Where did the names of Louisiana’s 64 Parishes come from? https://www.nola.com/travel/index.ssf/2017/03/64_louisiana_parish_names_hist.html

Featured image of “Our Lady of Guadalupe Church” courtesy of Christopher Chen.

“Built in 1826. Originally deemed The Old Mortuary Chapel, Our Lady of Guadalupe incorporates the oldest standing building of worship in its design. The founders created the church to hold funerals for yellow fever victims in the mid-19th century.” 411 N Rampart St., New Orleans.  Information courtesy of : https://nola.curbed.com/maps/new-orleans-oldest-places-of-worship-church-religion-